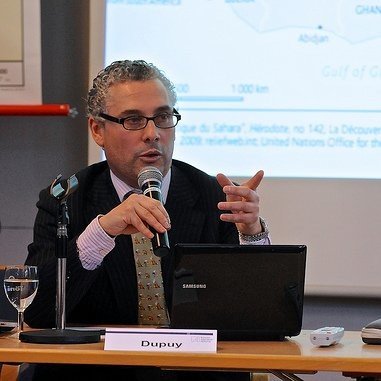 Emmanuel Dupuy was, during the year 2011, Political advisor of French forces located in Afghanistan (in Kapissa province, Kaboul and Surobi district) . He is vice-president of french based Club France-Afghanistan. He is an associate Professor in Catholic University of Lille  & ISG (private school focused on international relations). He is specialized on war and security studies in Africa, Central Asia, Caucasus and MENA region. He is also a researcher associated to several institutes or research centers, working on military and strategic studies, in Switzerland (Université de Genève, UNIGE) and in China (as a Special Researcher of Ningbo Maritime Silk Road Institute). He is also General Delegate of Centrist Party, in charge of International affairs.